This website is reader-supported. When you buy through links on our site, we may earn a small affiliate commission.

Where Do Chinchillas Come From?

In case you want to get a chinchilla for a pet, you might be interested in our article related to our favorite enclosure for chinchillas. We also recommend doing some research on cage accessories for chinchillas, as it is an important aspect when it comes to these pets.

Now, pretty much everyone has heard about chinchillas. There are also many people who keep them as pets. But how much do you actually know about your pet? This article is meant to explain where these cute creatures come from.

Chinchillas represent two species of crepuscular rodents of the parvorder Caviomorph. They are a bit larger and more robust than ground squirrels and are native to the Andes mountains from South America.

These rodents live in colonies that are called herds, at high elevations of up to 14000 feet. In the past, chinchillas used to live in larger areas that included parts of Argentina, Bolivia, Chile, and Peru, but nowadays the colonies in the wild are known to be only in Chile.

Together with their relatives, viscachas, they make up the family called Chinchillidae and are also related to the chinchilla rat. This species has the densest fur of all mammals living on land. As an interesting fact, in the water, the sea otter has the denser coat.

The chinchilla was named after the Chincha people of the Andes, who used to wear its dense and velvet-like fur. After being hunted for their ultra-soft fur, by the end of the 19th century, chinchillas had become quite rare.

Today, most chinchillas that are used by the fur industry and other accessories are farm-raised. These animals are also kept in homes, as they are considered a type of pocket pet. 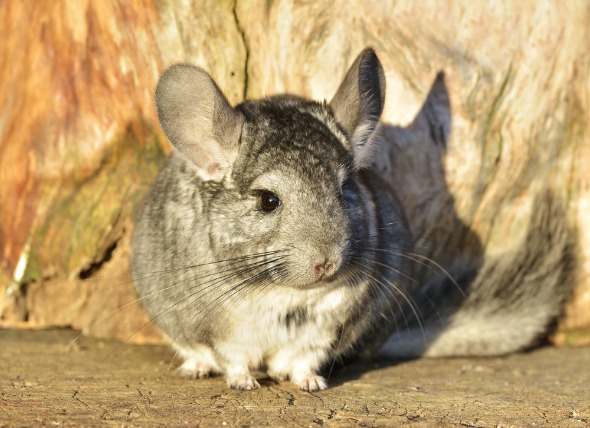 The two living species of chinchilla are Chinchillas lanigera and the Chinchilla chinchilla, also known as Chinchilla brevicaudata. The second species has a shorter tail, thicker neck, and shoulders, as well as shorter ears compared to the first species.

Unfortunately, they are currently also facing extinction. Chinchilla lanigera can be found in the wild, and they are believed to be the source of the domesticated chinchillas.

Chinchillas are believed to have appeared about 41 million years ago through their ancestors which were some of the first in South America. Chinchilla fur became very popular in the 18th century and due to heavy hunting, they became nearly extinct by the end of the 1900s. About this time, Argentina, Chile, Peru, and Bolivia banned hunting for wild chinchillas.

It is believed that an American mining engineer got special permission from the Chilean government to bring chinchillas to the United States, sometime in 1923. That means that every pet chinchilla in the US is a direct descendant of the 11 chinchillas that were brought to the country that year.

Chinchilla fur was originally mottled yellow-grey in the wild. Due to selective breeding, other colors have become common, and they include yellow-gray, bluish-gray, silver, beige, white, and even black. Interestingly enough, each hair ends in a black tip regardless of the chinchilla’s fur color.

These rodents are related to guinea pigs and porcupines. Since they have short forelimbs and long, muscular rear legs, chinchillas resemble rabbits, except for the ears which are much shorter and also rounder. Moreover, they have large, black eyes, as well as bushy tails.

These animals have four toes on each foot. The thin claws on each toe are protected by stiff bristles. Typically, chinchillas are 9 to 15 inches long and the tail can add 3 to 6 inches more to their length. Also, they usually weigh somewhere in the range of 1.1 to 1.8 pounds.

There is a good reason why chinchillas are covered in thick fur. In the Andes, they can live at elevations of about 9,800 to even 16,400 feet. At these heights, it can get very cold to even minus 23 Fahrenheit degrees. These rodents can tolerate freezing colds, but they cannot survive in temperatures higher than 80 Fahrenheit degrees.

High temperatures and humidity can cause them to suffer from heat stroke. Chinchillas are crepuscular and nocturnal creatures, which means that they are most active at dawn and dusk, and sleep during the day.

Their homes are made by burrowing in underground tunnels or by nestling in rock crevasses. They are very social animals that live in large colonies which consist of hundreds of members. Females seem to be aggressive toward other females, and even toward males when they are ready to mate. They are also the dominant of the two genders.

Furthermore, females are mostly monogamous and have only one mate throughout their lives. When it comes to males, on the other hand, they can have many female mates. This happens especially with domesticated males which are bred with multiple females to increase the number of offspring for sale.

When it comes to breeding, the season runs from November to May in the Northern Hemisphere, and from May to November in the Southern Hemisphere. After becoming pregnant, the female chinchilla carries her babies for approximately 111 days before giving birth.

They have babies twice a year and can produce one to six of them at a time. Just like in the case of rabbits, the chinchilla baby is called a kit, and a group of kits is called a litter. The newborn babies are born having hair and their eyes opened. They only weight about 1.2 ounces.

The kits nurse for six to eight weeks, and when they reach the age of 8 months, they are ready to mate. Usually, chinchillas can live for eight to ten years, but there are some known to have reached even 20 years.

Although chinchilla fur is very valuable for use in coats and clothing, the Convention on International Trade in Endangered Species has restricted the trade and sale of wild chinchillas since 1975. Most chinchillas are bred commercially for fur.

Tania is a full-time writer and pet lover. She is on a mission to help pet owners find the best products for their companion animals. She is committed to using her writing and research skills to create informative posts that will help pet parents look after their beloved companions and keep them healthy and happy.